Fighting Fearlessly For Your Rights 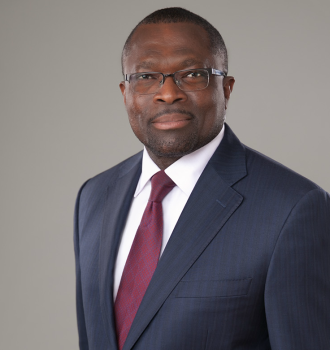 Joseph Onwuteaka, P.C. was born in Nigeria before migrating to the United States as a young boy. His parents instilled in him the deep-rooted principals of hard work, high standards, and integrity. The concepts of legislation promoted a love for the law that would be the inspiration for his life’s work. He had absolutely no idea how many lives he would touch and people he would effect by taking this path. He was only doing what he had always been taught to do, and that was to follow his dreams, do what’s right, and stand up for other people who may not be able to stand up for themselves.

Just a few years after being admitted to the bar, Joseph Onwuteaka soon won the landmark case of Carter v. Allstate Insurance Company, where the Court of Appeals held that an oral pre-suit agreement between an injured party and an insurance company is enforceable. He then went on to earn the Top 100 jury verdicts of 2004, winning a $28 Million jury verdict in the 36th District Court for corporate fraud and shareholder oppression. Joseph Onwuteaka single-handedly won the largest jury verdict in San Patricio, County, Texas earning him this title. Mr. Onwuteaka has also earned a Diploma in Trial Advocacy Skills by the National Institute for Trial Advocacy. Additionally, he has earned a James Douglas Moot Court Competition Award.

Joseph Onwuteaka also holds many different community and professional memberships, each of which remains near and dear to his heart. He is a member of the Million Dollar Advocates Forum, Elite Lawyers of America, Lawyers of Distinction, and the American Institute of Family Law Attorneys. Joseph Onwuteaka has been a long-standing member in good faith of the State Bar of Texas, the American Bar Association, the Million Dollar Advocates Forum, the Texas Society of Certified Public Accountants, and the Association of Attorneys and CPA’s.

"When you walk into my office with my problem, I'll do everything I can to help you solve it."

Joseph Onwuteaka has built an incredibly successful practice right in the heart of Houston, Texas, where he has helped thousands of clients gain some sort of justice and restitution for their damages. Joseph Onwuteaka has been practicing law for more than three decades now and has a reputation that precedes him everywhere he goes. He takes an aggressive approach to multiple areas of law because he values what he has worked so hard to build. Joseph Onwuteaka, P.C., enjoys standing up for the rights of others. That is why every single case gets individual, expert attention and guidance from start to finish because that’s the way it should be.Mr. Onwuteaka treats each of his clients with the respect that they deserve and he works hard for every one of them. He runs his practice with a transparency that is apparent and comforting to every client that comes through the door. His clients come in for a consultation and leave with strong, zealous representation.

Joseph Onwuteaka P.C. has spent more than three decades learning the laws specific to the state of Texas and many different specialty practice areas. He takes great pride in the service he provides his clients and takes each one of them very seriously. Joseph Onwuteaka enjoys practicing law and staying up to date on the ever-changing statutes that govern his practice. He believes that everyone deserves a fair shake and deserves restitution if they have been wronged. Mr. Onwuteaka has learned many practices for successfully navigating the litigation system and he enjoys putting them to work for his clients. His integrity is apparent and his motives are honest.

Joseph Onwuteaka does enjoy playing tennis but does not get to play as much as he would like. He spends most of his time and energy on his practice and his clients, because that is where his passion is. Over three decades of experience has given him the personal touch and the expertise to fight fiercely and consistently for his clients and their best interests. His tenacious approach allows him the fortitude to navigate the litigation process on a level that is unmatched.

The Law Office of Joseph Onwuteaka, P.C. is always happy to meet with a client and offer a free consultation. Whether you just have a few questions or you’re not sure if you have the grounds for a lawsuit, Joseph Onwuteaka will take time to listen. Too many practices today concentrate on herding people in and out of the doors like cattle with more on the almighty dollar than anything else. Joseph Onwuteaka, P.C., and his staff are dedicated to serving their clients with respect and dignity because that is what he has built his practice on. He understands that without his clients, there would be no practice.

Joseph Onwuteaka has spent more than three decades studying the practice of law and the many different specialized areas of litigation. He draws from this knowledge and experience to advise his clients with their best interest in mind, and nobody else’s. His motives are genuine and his expertise is apparent in the courtroom. You can trust Joseph Onwuteaka, P.C., to handle all of your legal matters so that you can move on with your life.